The Impact of Language on the Development of Mathematical Thinking 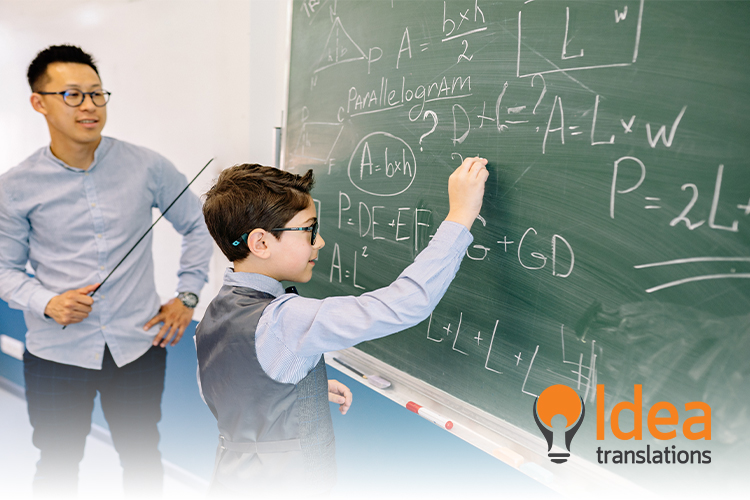 As several research studies suggest, our native language can influence the way in which problem-solving areas develop in our brain. In this fashion, the native language may determine how our brain solves mathematical puzzles.

Likewise, some experts also warn that different teaching methods across cultures or our genetics may have prepared the brains of Chinese and English speakers, for example, to solve equations differently. How does language affect our ability to do math and arithmetic?

The Watermark of the Mother Tongue

In 2006, a group of researchers led by neuroscientist and psychologist Yiyuan Tang at the Technological University of Dalian, China recruited 12 local Mandarin speaking university students but also 12 native English speakers from the United States, Australia, Canada and England. All were in their 20s and the numbers of both women and men were equal.

The volunteers were placed in a Magnetic Resonance Imaging (MRI) brain scanner while solving mathematical puzzles. For example, they had to press a button to indicate whether a third digit was equal to the sum of the first two numbers presented to them.

All tests were conducted with numbers used by English-speaking cultures and taught to Chinese students at a young age. The scans showed similar activity in the parietal cortex of the brains of both groups, a region believed to provide a sense of quantity.

Thus, the results suggest that the Chinese language way of describing numbers may make native speakers rely less on language processing when doing math: for example, “eleven” is ‘ten one’, “twenty-one” is ‘two ten
one’.

That means that learning to read in a particular way, or more generally, the cultural differences associated with different language groups, can have an impact on other cognitive domains; in this case, arithmetic processing.

The Effects on Bilingual Education

In 2021, a research carried out by the universities of Complutense of Madrid and Camilo José Cela in Spain sought to determine how instruction language has an impact on the development of mathematical thinking as a consequence of using an instruction in a language different from the students’ mother tongue.

The scientistsstudied a methodology widely
used in schools today called Content and Language Integrated Learning (CLIL), in which academic content and a foreign language are learned at the same time.

No more than 3% of U.S. students in elementary school are receiving some form of bilingual education. Source: AFT

More specifically, the researchers wanted to know whether the learning of mathematical concepts at an early age develops similarly if it is taught in the students’ native language and is not influenced by the language used for instruction. Or, alternatively, whether this manner of learning can influence the development of early skills only in students’ overall performance or in certain areas.

The study participants were in the first and second year of primary school in two international schools in Spain. The results confirmed how influential the instruction language is when developing mathematical thinking by teaching formal content in a non-matching language: the second language affects everyday problem solving, but those 1st graders whose instruction language matches their mother tongue are more proficient.

The findings of these and other research studies make clear the importance and the recommendation that the mother tongue be used in the teaching of mathematics in elementary schools. This finding is key to changing and improving the way we educate, especially in cultures where the population of early learners who do not use the local language as their primary language is high, as is the case in the United States, Canada, the United Kingdom, Australia and many other countries with large immigrant and refugee populations.